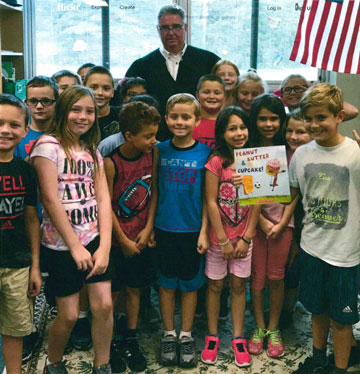 The Judge Goes to School!

Judge John Kitley Jr. accepted an invitation by the Indiana Supreme Court to speak to students in Marion County about Constitution Day. The US Constitution was signed on September 17, 1787 and its signing is celebrated every year (for free resources and printable items to share with children go to: http://www.constitutionday.com/ ). The Judge was invited by and welcomed into Thompson Crossing Elementary School here in Franklin Township Community School Corporation by Mr. Jeff Murphy, Principal and Mrs. Tacie Cullingford, a teacher at Thompson Crossing.
The students in Mrs. Cullingford’s class were quite excited to learn more about Constitution Day and how it is celebrated and recognized nationwide. The students were enthralled by what Judge Kitley had to share with them! The Judge explained the U.S. Constitution, its historical significance and how it guarantees personal liberties and provides for government by the people through the election process.
Judge Kitley explained to the students how the U.S. Constitution breaks down power and authority through the three branches of Government. Those three branches are the Judicial branch, the Legislative branch and the Executive branch. These three branches within our Government provide for a system of checks and balances for one another.
The U.S. Constitution is one of our country’s most iconic documents that has survived for centuries. Since it came into force in 1879, the Constitution has been amended only twenty-seven (27) times. You can view the actual U.S. Constitution as signed by thirty-nine of the fifty-five delegates (our forefathers) if you go to National Archives and Records Administration in Washington D.C. The U.S. Constitution is a true masterpiece drafted by brilliant men of their time.
After Judge Kitley spoke with the students they had several very interesting questions about the U.S. Constitution, the law, and Judges! It was a great day to spend in Franklin Township!